Metapunk Web3 Community 🦙 is a community of amazing Web3, Blockchain and Metaverse enthusiasts

This tutorial is meant for those with a basic knowledge of Ethereum and smart contracts, who have some knowledge of HTML and JavaScript, but who are new to dApps.
The purpose of building this blog is to write down the detailed operation history and my memo for learning the dApps.
If you are also interested and want to get hands dirty, just follow these steps below and have fun!~

In this tutorial we will be covering:

Geth(Go Ethereum) is a command-line interface for running Ethereum nodes implemented in Go Language. Using Geth you can join the Ethereum network, transfer ether between accounts or even mine ethers.

We should first install Geth using the following CLI command:

Then we can navigate to our favourite directory, create a folder with your favourite name (e.g. named my-private-blockchain)and navigate into the folder using the following command:

We can then run the following command to see if Geth has been installed successfully:

If your CLI gets information like mine, congrats! You are on the track now. Geth is attempting to download the entire blockchain data into your PC, and the data can take up a ton of disk space. Just Control C to stop the command.

If you are very interested in what has happened just now, you can open a new CLI and navigate to the following directory to see the history logs:

Let's run the following command to create the first account on our private blockchain:

We need to create a genesis block - the first block of the blockchain - to initialize our blockchain network.

Next let's open the folder /private-blockchain-geth using our favourite IDE (Mine is VSCode, and currently there is no file in this directory), create a file named genesis-block.json, copy and paste the following code to this file: 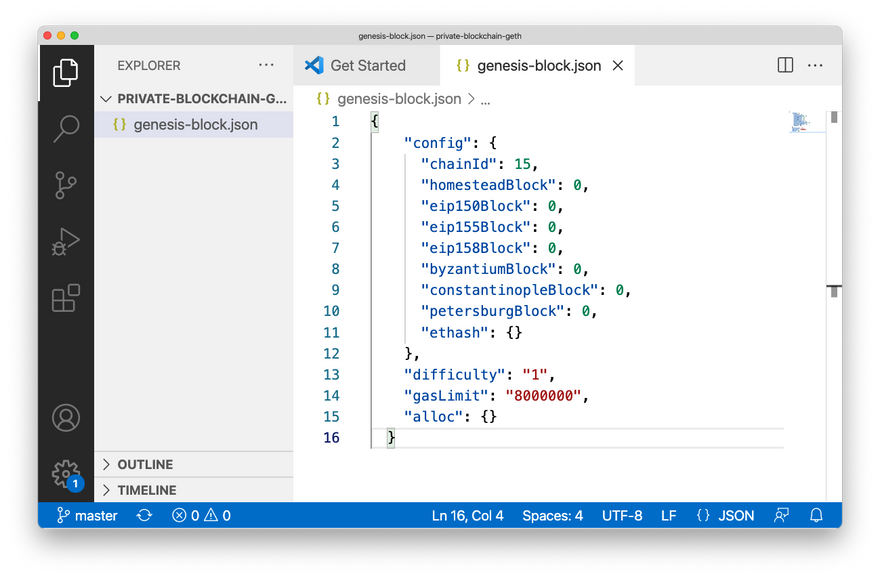 The next step is to initialize the genesis block using this command:

The log "Successfully wrote genesis state" indicates that we have created our first block correctly. Now we can deploy our blockchain using the following command:

Note: Replace YOUR_ACCOUNT_0_ADDRESS with your account 0 Public address of the key

We have kicked off an interactive session that keeps printing new INFO of our blockchain. Leave it running and let's start a new CLI, navigate to the same directory /private-blockchain-geth and initialize Geth JavaScript console by running the following command:

To begin mining our blockchain, we can run:

Let's allow it to run for a while, and then stop the mining by typing:

Now We have rewarded some tokens for mining new blocks. We can verify this by running the following command:

Run the following command to finish the authentication process of account 0 before sending tokens:

Since we had stopped the mining process before we were creating the transaction, this transaction is added to the memory pool rather than being added to the blockchain. At this point, account 1 cannot receive the transferred token if we run:

Let's start the mining process again for a while:

And run the following again:

Custodial Wallets And Their Outstanding Features

Once suspended, yongchanghe will not be able to comment or publish posts until their suspension is removed.

Once unsuspended, yongchanghe will be able to comment and publish posts again.

Once unpublished, all posts by yongchanghe will become hidden and only accessible to themselves.

If yongchanghe is not suspended, they can still re-publish their posts from their dashboard.

Once unpublished, this post will become invisible to the public and only accessible to Yongchang He.

Thanks for keeping Metapunk Web3 Community 🦙 safe. Here is what you can do to flag yongchanghe:

Unflagging yongchanghe will restore default visibility to their posts.