I’ll be optimizing a sample NFT project from my upcoming book “A developer’s guide to launching an NFT collection”.

Before we turn on the optimizer, let’s start by measuring our current gas costs to give us a benchmark to compare against. We’ll need to first install and configure the hardhat-gas-reporter plugin.

The hardhat-gas-reporter plugin overrides hardhat’s npx hardhat test command and tracks the average gas price of every function that is called within your tests.

You may have guessed it — having automated tests for your project is required to use the gas reporter!

Add the following block to the settings exported from that file:

In order for the gas reporter to give us the monetary cost of each transaction, we’ll need a CoinMarketCap API key, which can be acquired for free from their website.

Go ahead and add the following lines to your .env file:

Let’s run our tests again via npx hardhat test. The gas reporter plugin will take over and will log the gas used in every function call and will output the results to the gas-report-txt file. 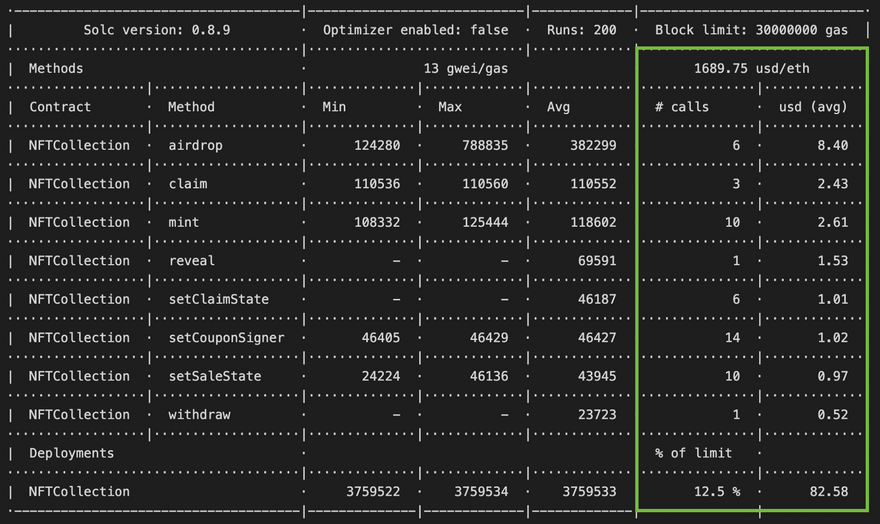 This report is really useful in estimating how much your contract will cost to deploy to production, and how much each transaction will cost once deployed.

It also gives us a benchmark that we can use to measure our gas optimization efforts!

Let’s configure the solidity compiler to optimize our code for us by adjusting the solidity line in our hardhat configuration in hardhat.config.js:

Apart from turning the optimizer on, the only configuration option we have is the runs parameter.

From the solidity documentation:

The number of runs specifies roughly how often each opcode of the deployed code will be executed across the life-time of the contract. This means it is a trade-off parameter between code size (deploy cost) and code execution cost (cost after deployment).

200 or 300 runs is a sensible default, but I encourage you to experiment with different values to see how it effects deployment and transaction costs, and pick the most appropriate value for your project.

Here’s the same report again, but with the optimizer turned on. Notice the reduction in gas prices: 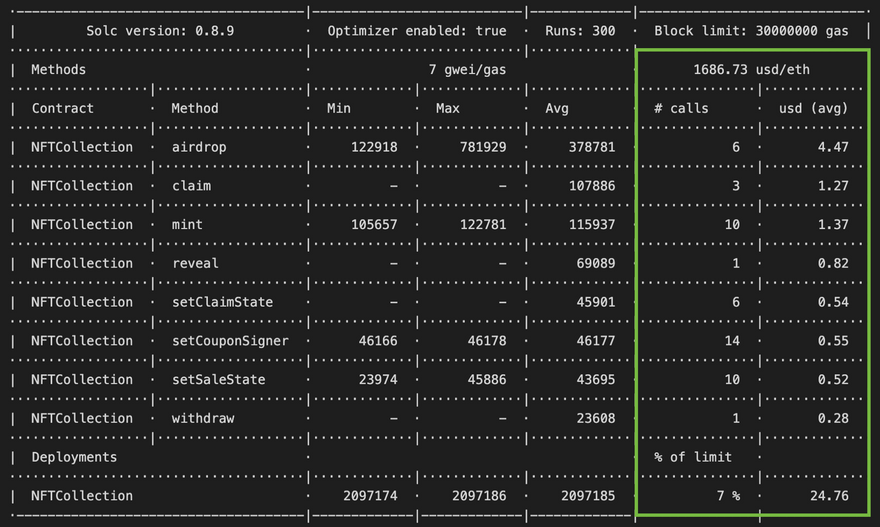 Follow me on twitter for more blockchain-related tips and tricks, and to keep in the loop about my upcoming book launch: “A developer’s guide to launching an NFT collection”.

How to create your Metaverse NFT?

Custodial Wallets And Their Outstanding Features

Michael Stivala
Hello 👋. I’m a software engineer with over 10 years of experience in taking projects from idea to production. COMING SOON → 📖 "A developer's guide to launching an NFT collection".
How to Create an Off-chain NFT Whitelis
#tutorials #nft #nftdrop #web3

Once suspended, michaelstivala will not be able to comment or publish posts until their suspension is removed.

Once unsuspended, michaelstivala will be able to comment and publish posts again.

Once unpublished, all posts by michaelstivala will become hidden and only accessible to themselves.

If michaelstivala is not suspended, they can still re-publish their posts from their dashboard.

Once unpublished, this post will become invisible to the public and only accessible to Michael Stivala.

Thanks for keeping Metapunk Community safe. Here is what you can do to flag michaelstivala:

Unflagging michaelstivala will restore default visibility to their posts.