Metapunk Web3 Community is a community of amazing Web3, Blockchain and NFT enthusiasts

What are Smart Contracts?

Smart contracts are simply programs stored on a blockchain that run when predetermined conditions are met. They typically are used to automate the execution of an agreement so that all participants can be immediately certain of the outcome, without any intermediary’s involvement or time loss. They can also automate a workflow, triggering the next action when conditions are met.

Things you need to build and deploy your first Smart Contract

The fastest way to run a solidity smart contract is by using an online Solidity IDE like Remix (recommended).

The Remix IDE is a powerful, open source Solidity IDE that allows us to quickly write, compile, and deploy smart contracts directly from the web browser.

Visit remix.ethereum.org to launch the Remix IDE on your browser. 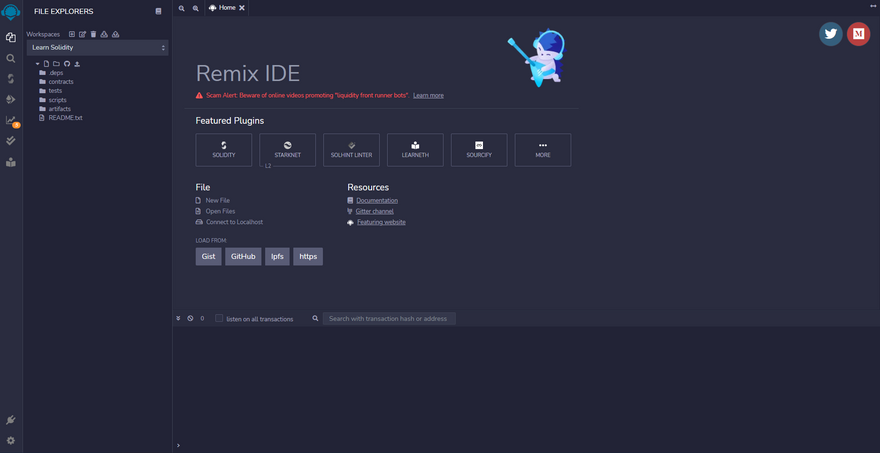 Next, locate the contracts folder under the "File Explorers" section and create a new Gem_Mine.sol file inside like this: 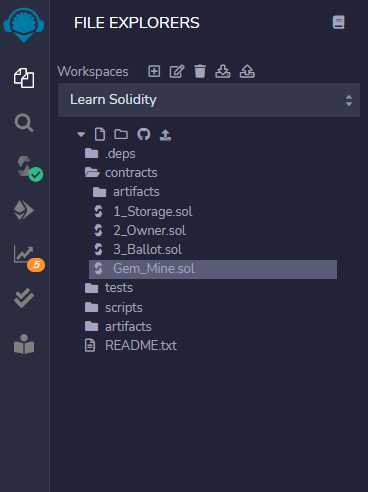 In this step, we're going to write a Gem_Mine smart contract that will store location data for the Mines.

Copy and paste the code below inside of your Gem_Mine file:

Every developer is encouraged to add a machine readable license at the top of their Solidity Source file, as shown below:

The MIT license is similar to the license you'll find on GitHub. You can add the UNLICENSED value if you don't want to specify a license on your Solidity source file, but this should not be left blank.

You can check out the complete list of Solidity Licenses supported by SPDX here.

In Solidity the pragma keyword is used to configure compiler features and checks.

The first line is a pragma directive which tells that the source code is written for which Solidity version.

A contract is a collection of states and functions that is deployed on the blockchain at a specified address.

In programming, a function is a block of code that performs a task. They’re code components that have been encapsulated into a single object.

5. Mapping and Variables in Solidity

Mapping in Solidity acts like a hash table or dictionary in any other language. These are used to store the data in the form of key-value pairs, a key can be any of the built-in data types but reference types are not allowed while the value can be of any type.

Here we declare a unsigned 256 bit integer variable called counter and initialize it to 0.

Solidity allows user to create their own data type in the form of structure. The struct contains a group of elements with a different data type. Generally, it is used to represent a record. To define a structure struct keyword is used, which creates a new data type.

Here we create a struct called Mine which contains two fields, id and location.

id - is a unsigned 256 bit integer variable to store ID of the Mine.

location - is a string variable to store location of the Mine.

Remix IDE allows us to compile our Solidity smart contracts directly from our browser. 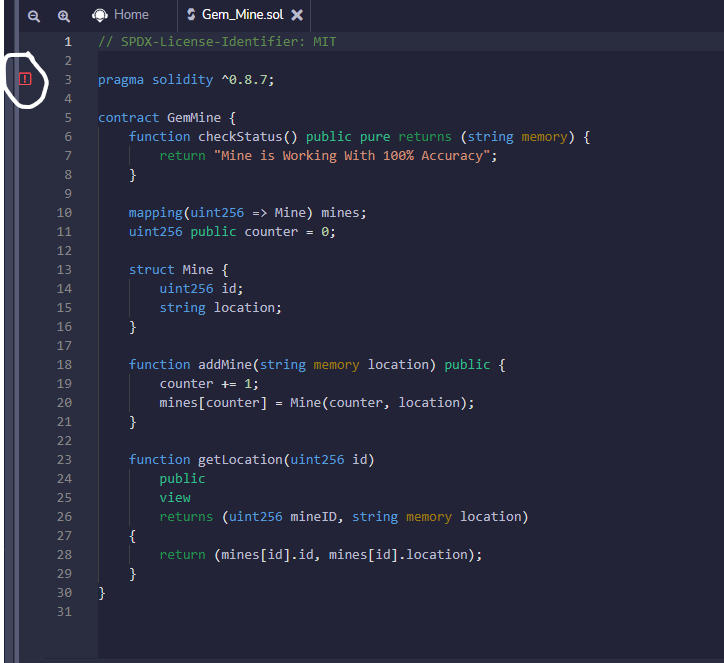 It means that the Remix IDE compiler is not set to the specified Solidity version in our source code.

To fix this, click on the Solidity compiler icon and select the Solidity version you're using for your smart contract: 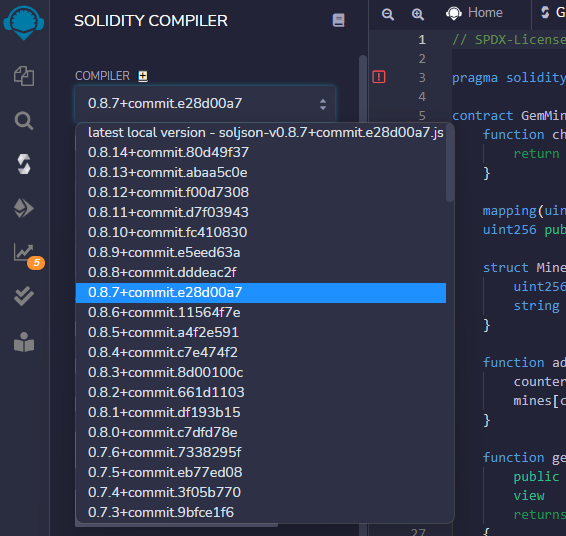 Finally, save your source file with CTRL + S and click on the compile button. Your Solidity compiler icon should change to green as shown below: 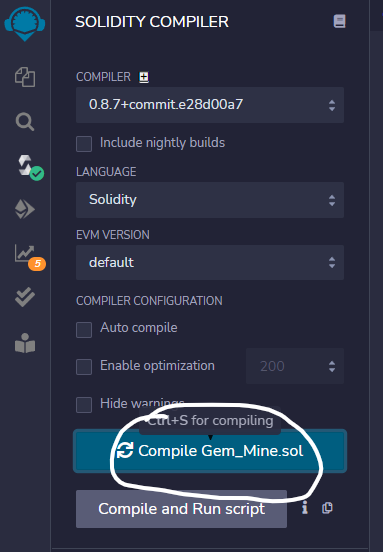 It's time to deploy our smart contract. Click on the "Deploy & Run Transaction" button from the sidebar.

You can read more about the Remix IDE Virtual Machine Environment here. 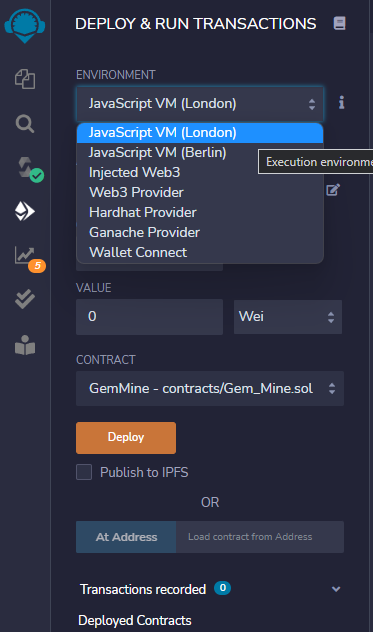 Next, leave the other default options as they are, and click on the "deploy" button

If the deploy was successful, you'll see our smart contract name under the Deployed Contracts section, which is located under the "deploy" button 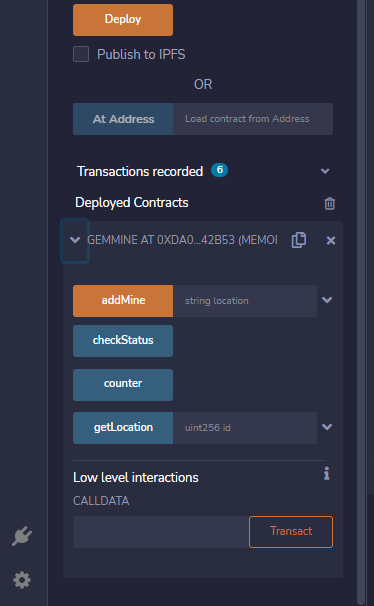 The getter function is automatically generated for all state variables by the Remix IDE.

Step 6 - Interacting with the Smart Contract

Our first interaction with the smart contract is to call the checkStatus function and see if it returns the expected value. 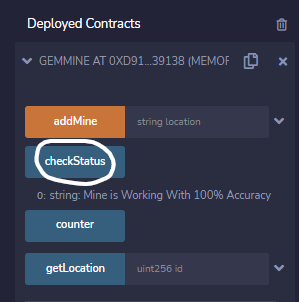 The Mine is Working With 100% Accuracy

Now Click on the counter button which should return its default initial value of 0. 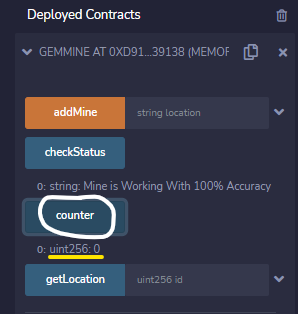 In this step we'll check our addMine function. 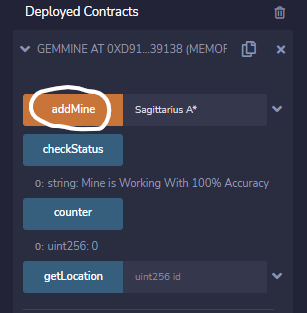 Now click on the counter button which should now return 1 as we have added one mine. 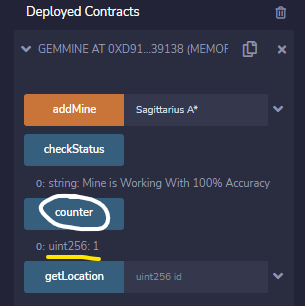 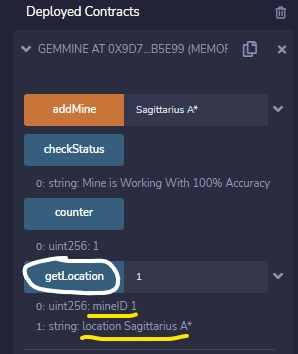 Congratulations on completing this Solidity tutorial! We've learned how to use the Remix IDE to write, deploy, and interact with our first smart contract.

Getting started with Solidity

How to mine Eth in 5 min